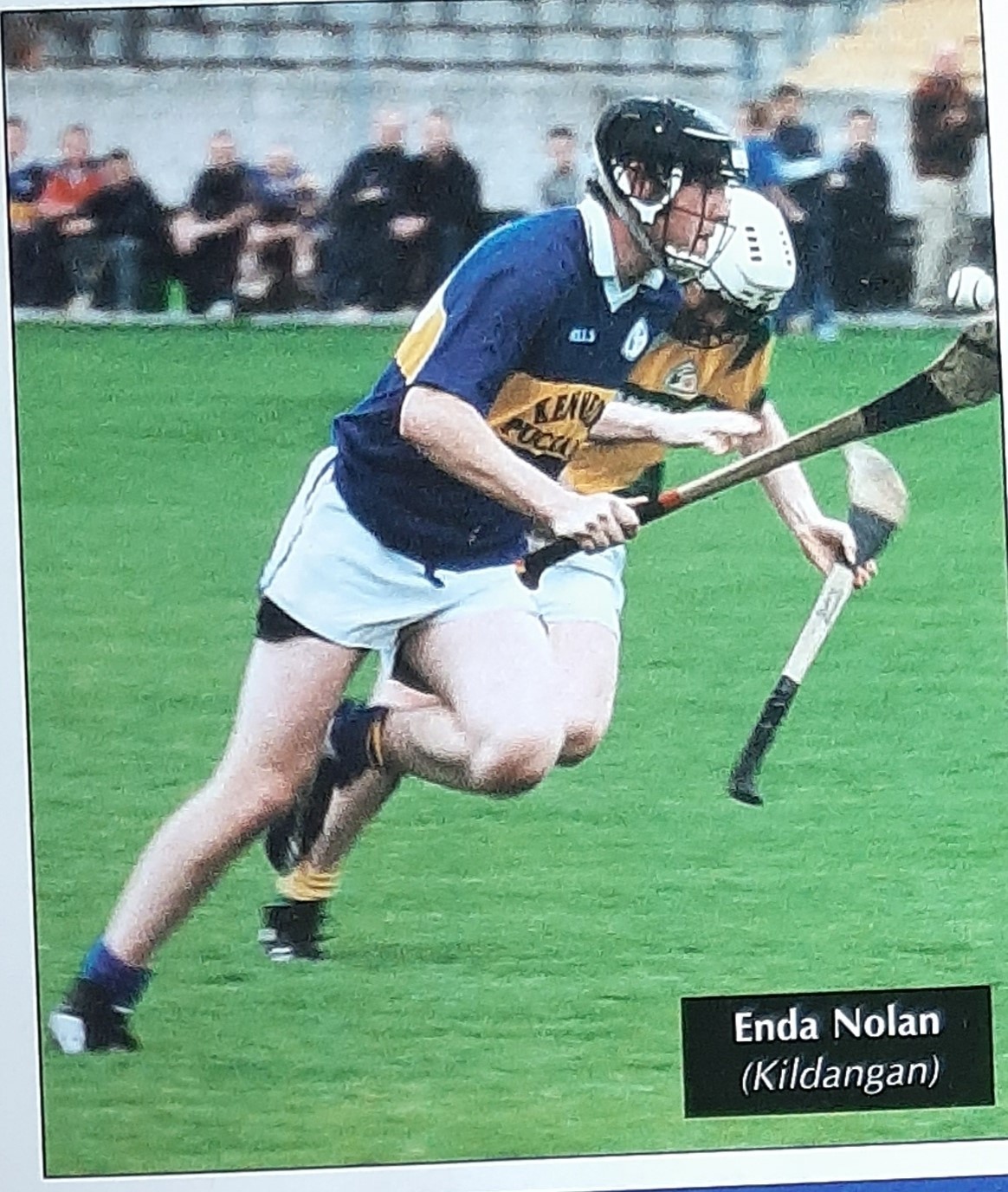 Next in the ‘Kiladangan Abroad’ series, we have former Kiladangan player Enda Nolan who has been based in Scotland for the past 13 years. For anyone who doesn't knows Enda, his doesn't do the norm. Here he puts together a lovely heartfelt article along with a poem to finish. A great piece to read during these challenging times. Enjoy!

Thank you for this opportunity for me to reconnect to the club I love as much as I loved sitting between Paddy ‘The Doughan’ Hayes and Martin ‘Short Arse’ Collins in McGrath’s of a Saturday afternoon !! It was a thing of beauty.

So please bear with me here, for as Desmond Slattery would say of me and my head “it was like his front room - there was nothing in it!' Rovers a***hole!!

Now Looking at a laptop for me is similar to when I looked at my first playboy,

I’m no friend of technology and long for the return of the Nokia 32 10. 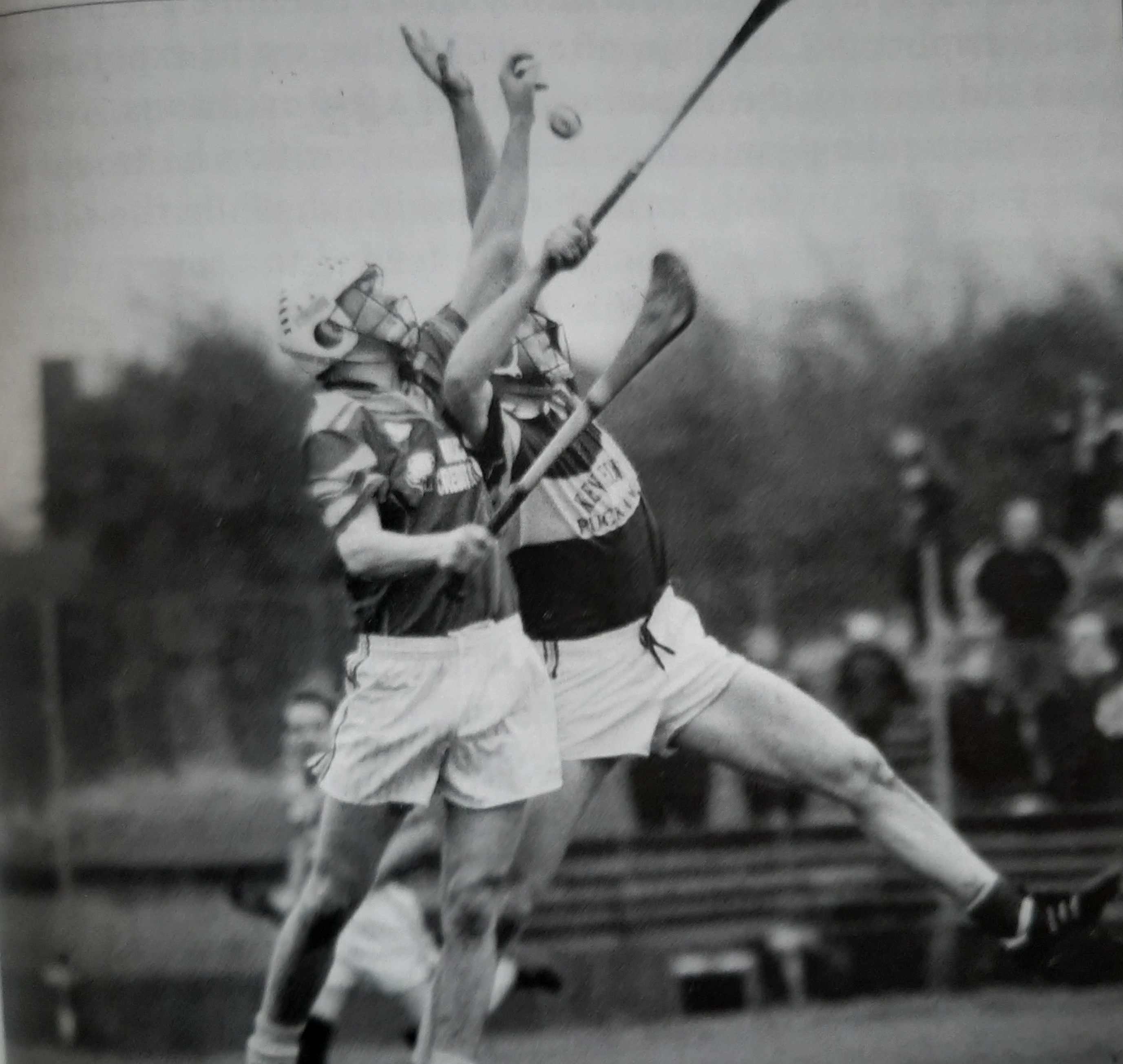 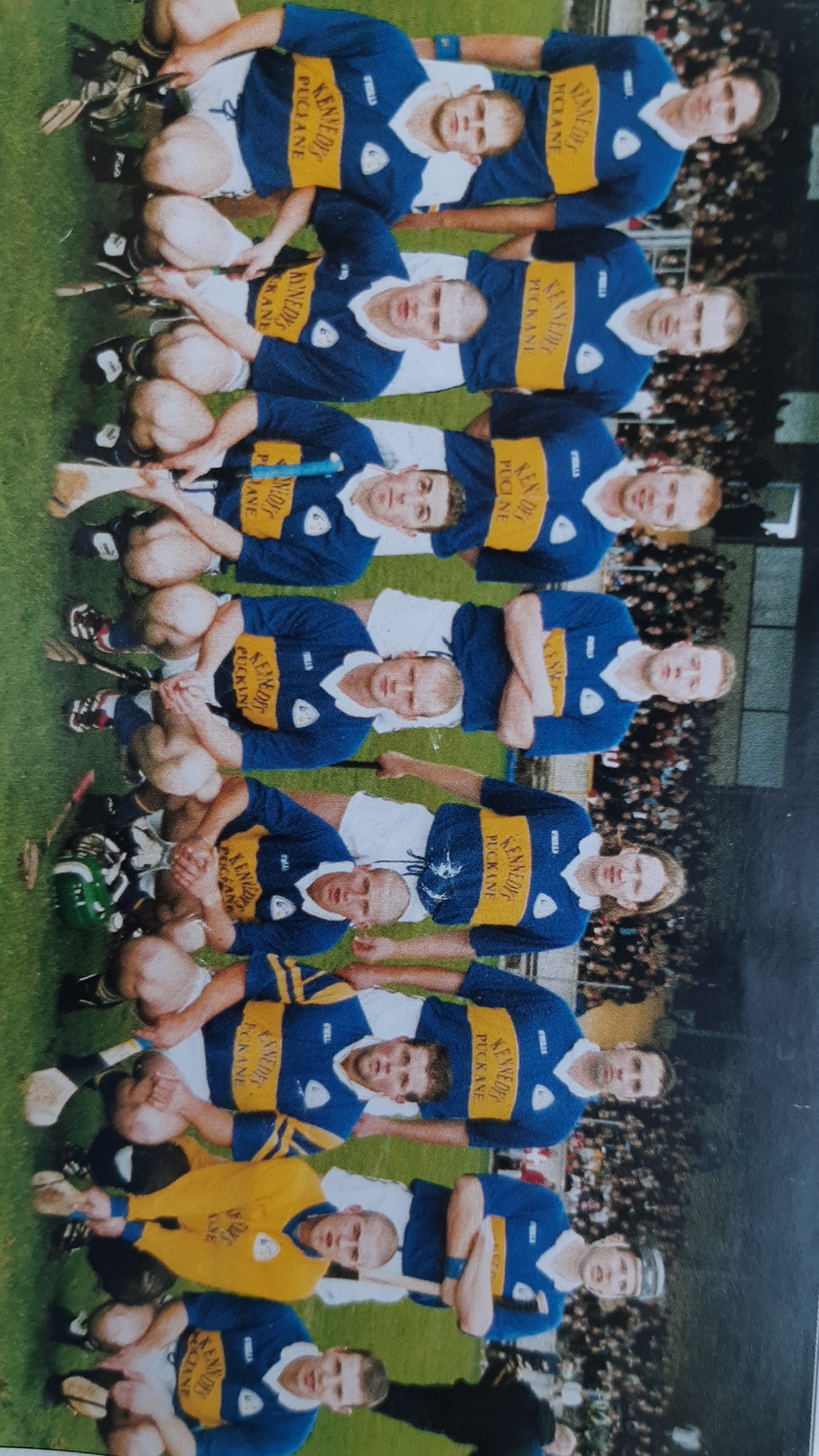 However, I’d love to answer the well put together and thought out questions but that would be the right thing to do. Anyone who knew me during my time at Kiladangan will know that doing the right thing was very difficult for me to do and still is - so instead I’d like to pay homage to my Kiladangan hero :

Bernard was our captain, our leader, the guy we looked to when the s**t was nearing the fan!! He was an all-rounder on a team and in a club where all-rounders were like hens’ teeth. He was streets ahead of the rest of us but on a par with the great Colm McGrath (who went on to do f**k all like me! By jingoes ‘twas)

He led us to a North Under 12 ‘B’ Hurling Final and represented us impeccably on receiving the cup, as I recall he nailed his “Ta an athas orm an corn seo a ghlacadh”. Being one of Bernard’s buds brought many perks, mainly getting to travel to the games with his dad Sean.

We got Sean’s many catch phrases on the way to the game like:

“who let you out “, “are you him or the other fella “, “Bottle him up “and who could forget

“cut rashers and sausages off him “.

The last one in particular gave me much consternation as I hoped the sliotar avoided me. It just wasn’t physically possible to cut rashers and sausages off a human being during a juvenile game but I watched the older boys try very hard to achieve this - lads like James and Art Flannery, James Minehan, Dan (Headboard) Hogan, Willie Seymour and Kevin ‘Horse’ Ryan .

I finally realised Sean’s sayings we’re not to be taken literally and they will stay with me forever.

What will also stay with me forever was win lose or draw, we stopped at Martin Morrisey’s shop in Nenagh on the way home for a 99. That’s when 99’s were 999’s in our money today. Sean was very generous to us chosen few squashed into the back of his Peugeot 405.

We laughed all the way there and all the way back so no wonder we won the cup because as we all know, the secret sauce is fun!! Seamus Hayes (Jimmer) mastered this new technique!!

We loved every minute - Except for Jimmers “if god wanted us to puck the ball up in the air he would of put grass up there“. I’ve still no clue?

Bernard was a fantastic set dancer.

We danced all over Tipperary every Sunday accompanied by the best box player in Killaun/Castlesheela 😊 - none other than our own Seamus Gleeson!!. He trained Ned Kelly did you know!!

I hear what you’re thinking: “Bally softies, set dancing away till their little hearts were content across the bridge“. Well that’s where the Puckane welly gang were wrong!!

For was it not Nicholas ‘God’ English himself that started out as a set dancer. It was only after he conquered this world did, he turn his attentions to the mystical world of the ASH AND SLIOTARRRR (dramatic effect).

Us lot over the bridge were streets ahead of our mysterious neighbours on the other side!! While they spoke a language that we couldn’t understand, they built straw huts and kissed more girls than we could only have dreamed of inside said huts ☹, we stuck with our hard toed shoes which we made spark to the delight of Paddy and Josie Cooney (god rest their souls) all over Tipperary.

There was a natural competition between myself, Bernard, Colm McGrath and John Slattery for the crown of best dancer. Colm, the most modest of us, was sure it was him!! - But we all knew it was Bernard. He hopped higher, swung faster and smiled bigger than the rest of us poor ba****ds put together!! And that’s saying something with John ‘The Teeth’ Slattery in the mix!! - sunglasses were required when opposite him 😊.

What we all agreed on was that we adored Bernard Maher equally!!

He possessed a kind nature that he inherited straight from his mother Eileen. Theresa, John and Geraldine made me feel like family, even if John tried to kill us both when we took him on 2 against 1 ;) ahhhh jasus ref !!;)

I can still to this day remember Bernard’s laugh which was very distinct and would get us caught quite easily when acting the b****x.

After the tragic death of Bernard our lives changed forever!! We continued as if we were fine but the truth is Bernard never left us!!

I buried the memory of Bernard to the back of my head for years as a defence mechanism!!

A classic male move!! Until driving home from work in Edinburgh one night recently and his memory hit me in the face like a train !! I cried all the way home!!

I’m ashamed of hiding his memory but totally understand why I did!! We are programmed to keep moving forward no matter what.

Bernard should be remembered along with David Gavin, Kian Hayes, Liam (Axel) Foley , Carol Seymour, Ann Delaney and Josephine Quinn as our Dangan brothers and sisters who left too soon. 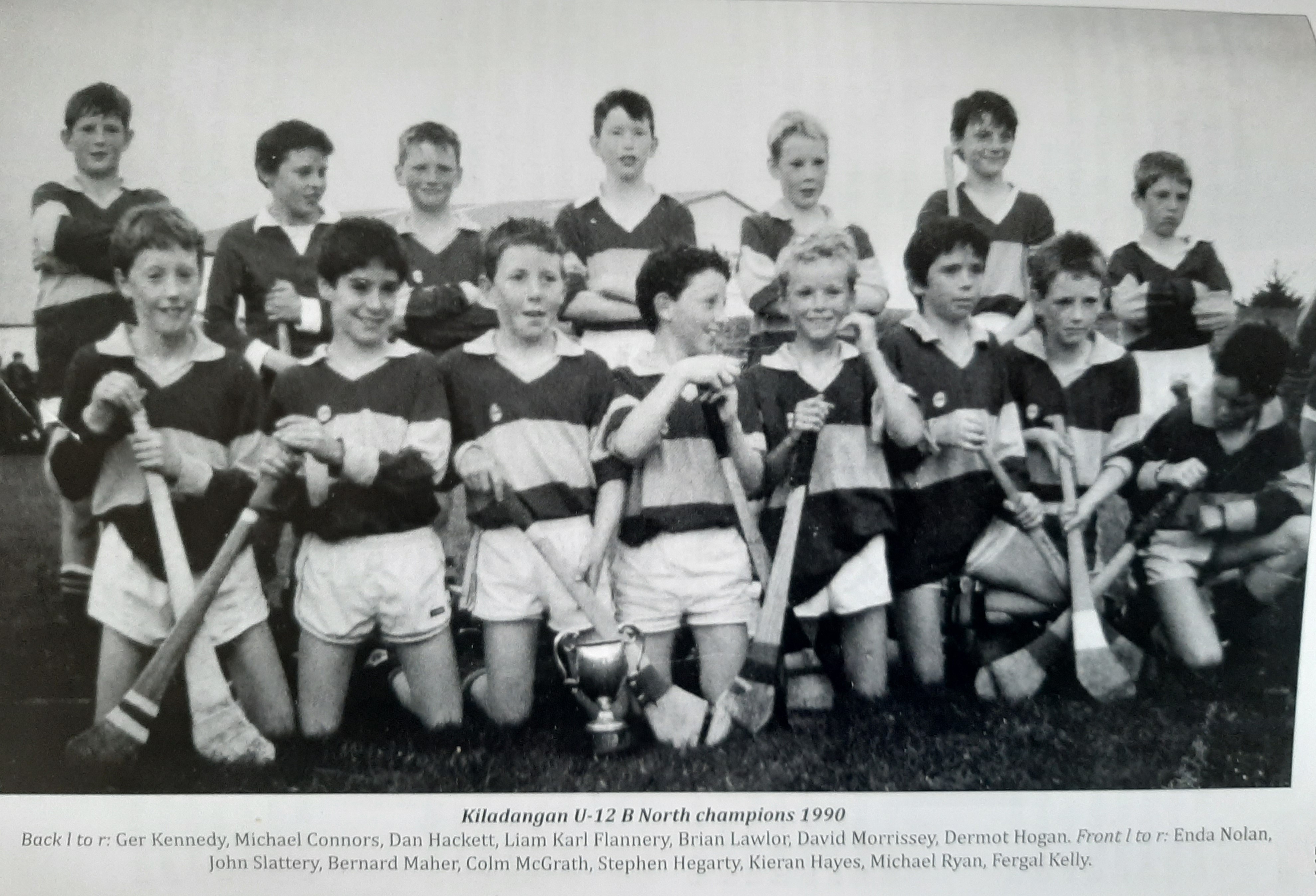 When the field she ran the other way

we had a greater chance,

With such a fall your eyes deceived,

If you played with it in the first half,

Cause you knew that in the second half you wouldn’t get a puck!!

The dressing room had a massive hole,

the aftermath of World War 2,

And the smell of booze off the older lads (Eamonn, Punky, Willie)

would make you want to vomit in your shoe.

So, we battled on like this for years and had our ups more downs

Till a few wise men combined their heads and said let’s spend some pounds.

So they spun the field the other way,

Id swear it took one day!!

Now all we wanted was a hurling guru!!

Who would let us go and play!!

Now the Jimmer Hayes entered our lives with such a thunderous bang!!

As we hung on every lisping word,

And from his hymn sheet we just sang.

Hed wind up Mickey Scart until his head was near to blow,

While a whisper in Steven Hegarty’s ear,

Come on man you just go!!

Dermy Hogan was our feisty chap,

A law on to his own,

A cloud of smoke consumed his end,

“Brian Lawlor you stick to your man

The Connors boys were fire works,

Ger and Barbs locked in at night!

To John and Gerry Slattery,

Cause their heads were wrecked from Dinny Senior,

Sure you couldn’t get in a word!!

Dan Hackett he was our Roy Keane,

And not much need be said ,

Until we played the Nenagh,

Hugh and Liam were busy kicking the s**t out of each other,

It was easy see where that came from.

I was thought by their dad and mother !!;)

So This in my humble opinion was where the turn began,

And as I write this here in kilt land,

As a lonely foreign fan.

For the club that stands before me,

I tip my hat to every man (and woman - but it doesn’t rhyme so sorry ladies !!)

Who gave their time to raise this special club to this great height!!

I summon the words of our auld Spike

So all, in the nicest possible way. 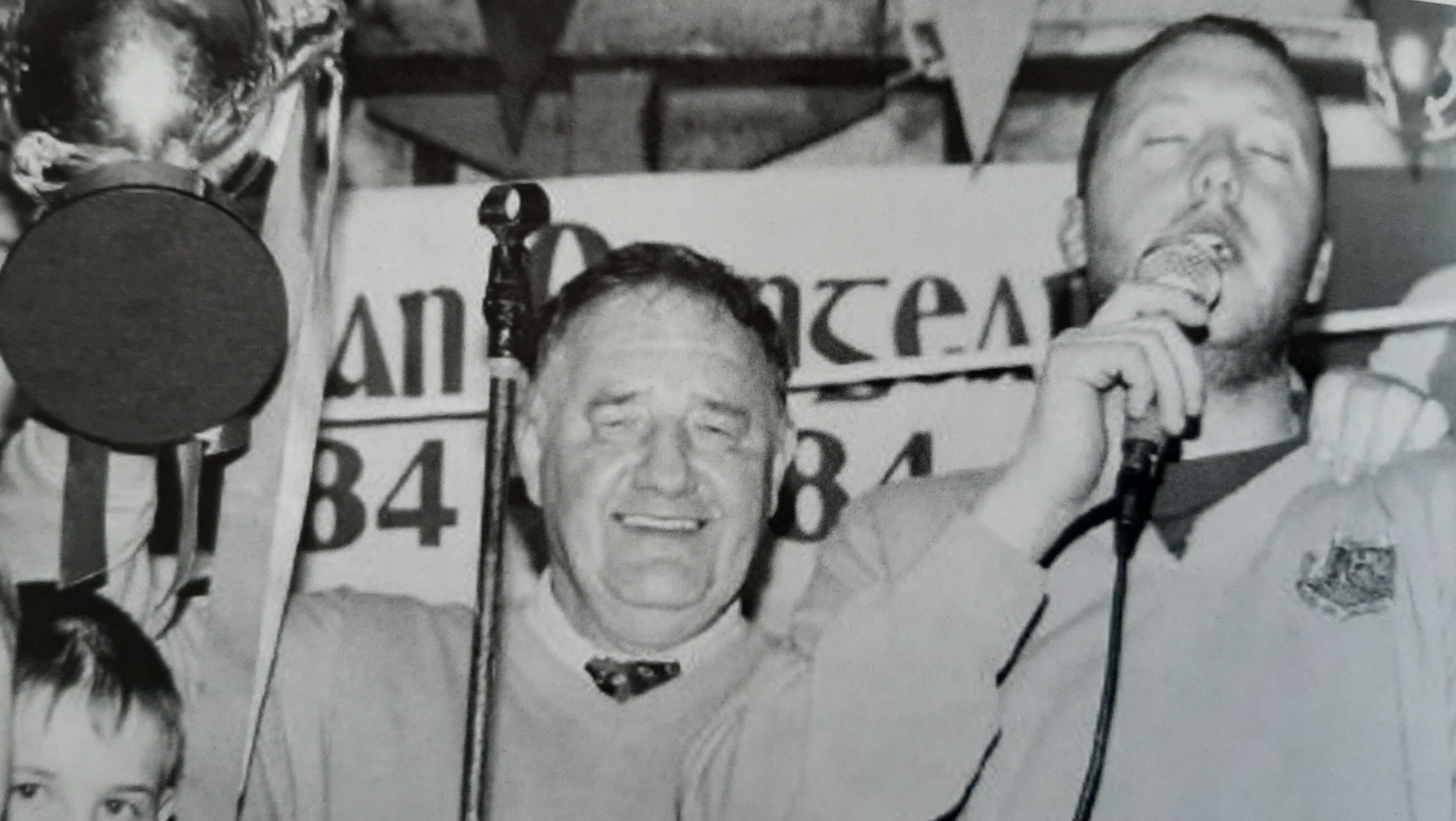 Enda celebrating with his late father, Mike 'Spike' Nolan, after the All Ireland Intermediate victory 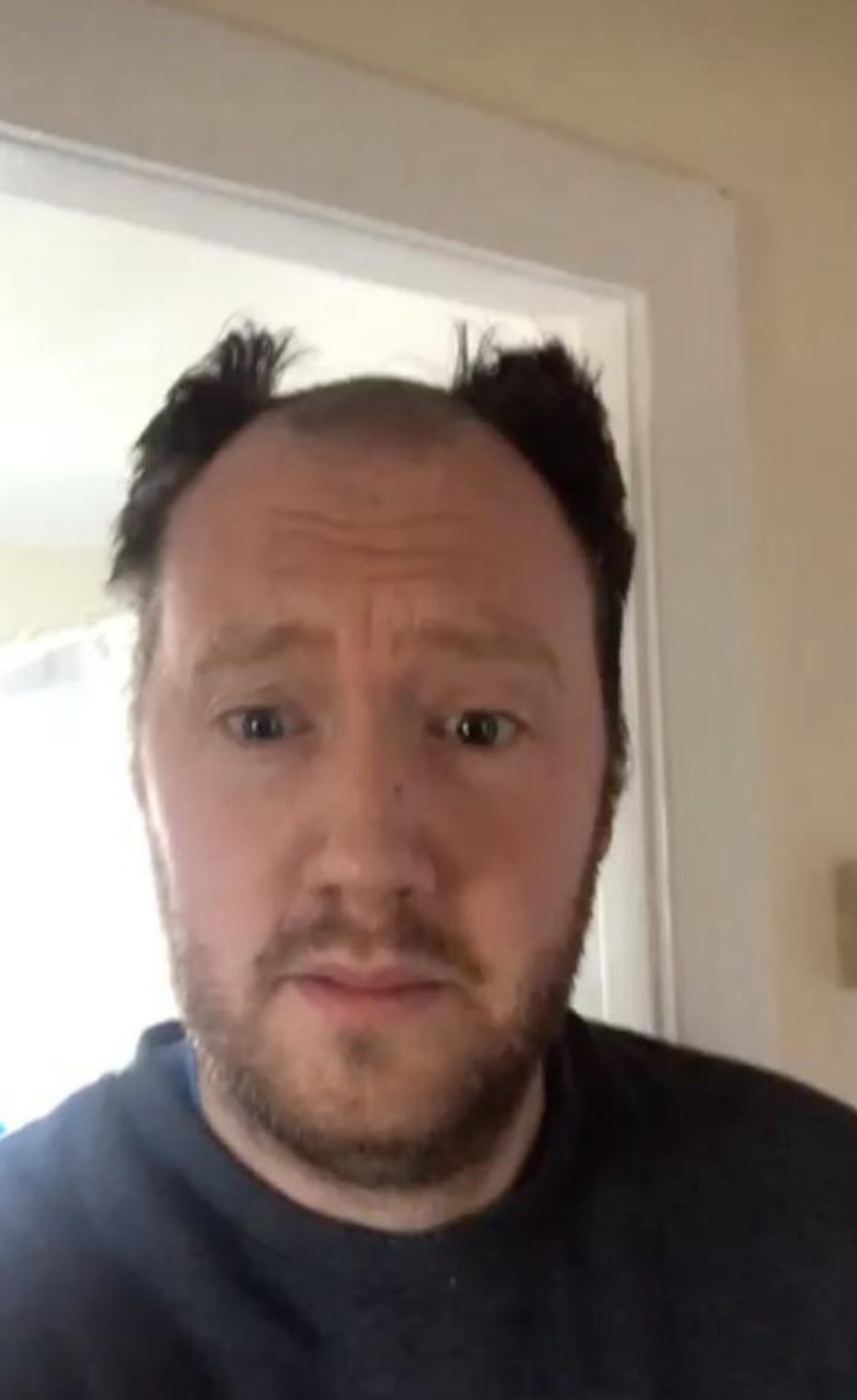 Enda having a bad hair day!

Don't forget - the Kiladangan Lotto is resuming this Monday night with a jackpot of €10,000. Enter online at https://kiladangangaa.clubifyapp.com/products