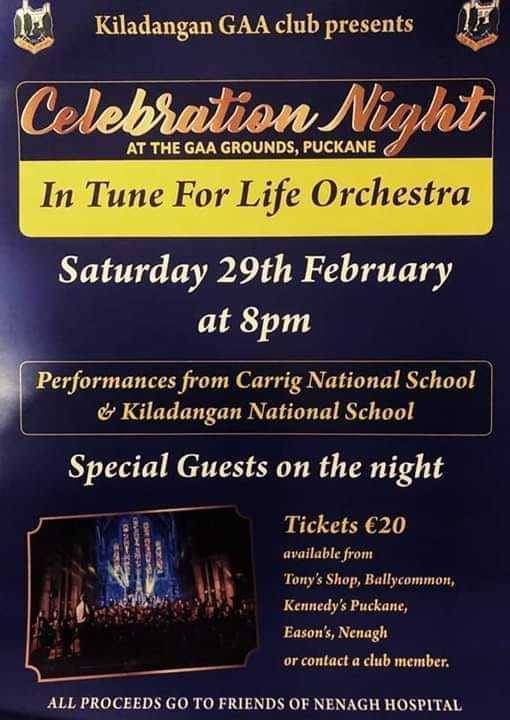 The ‘In Tune for Life Orchestra’ in aid of Friends of Nenagh Hospital Fundraiser takes place this coming Saturday 29th February at 8pm in the club’s new complex in Puckane. After receiving his Outstanding Contribution Award last weekend, Ned Kelly will lead the Orchestra on the night and will be joined by performances from Kiladangan and Carrig National School. Tickets are priced at €20 and are available from any club officer as well as Tony’s Tipp Top Shop Ballycommon, Kenndy’s Shop Puckane, McGraths Bar Puckane and Eason’s Nenagh. Entry for juveniles is free on the night.

In Division 1 Group 2, our Senior ‘A’s will take on Lorrha in the first round on Sunday 8th March in Puckane whilst the Senior ‘B’s are due to take on Ballinahinch on the same weekend, also in Puckane. Full details of both fixtures will be announced once finalised.

Kiladangan are away to Ballina in the first round of the group stages of the North Junior ‘B’ league on Saturday 7th March at 4pm.

Kiladangan’s scheduled game against Inane Rovers due to take place last Sunday in Puckane was postponed due to unplayable pitches. Please keep.an eye out on the clubs social.media pages for refixture details.

Well done to the Tipperary Senior hurlers who defeated Westmeath last Sunday in Semple Stadium on a 3-27 to 0-16 score line. Alan Flynn scored two points from midfield whilst his twin brother Paul made a second half appearance at corner forward.

Dan O’Meara and the Tipperary footballers were unlucky to lose out to Cork by a point on Saturday evening.

The hurlers will be out in action this Sunday where they will take on Waterford in Semple Stadium at 2 pm.

The Tipperary GAA Bloody Sunday Commemoration Committee have announced an exciting lecture which takes place on March 2nd, at 8pm in the Abbey Court Hotel in Nenagh as historian John Flannery will host a talk entitled “Bloody Sunday, A Bitter Legacy or a Legacy of Bitterness?” This event, in conjunction with the Ormond Historical Society and Nenagh 800, promises to be an entertaining, educational and insightful talk which will discuss the events surrounding that awful day and the long-lasting effects which can be felt to the present day.

Well done to Kiladangan underage player Tom Boland who was part of the Nenagh Handball team who won the under-12 Tipperary Handball Development tournament in Cashel recently.