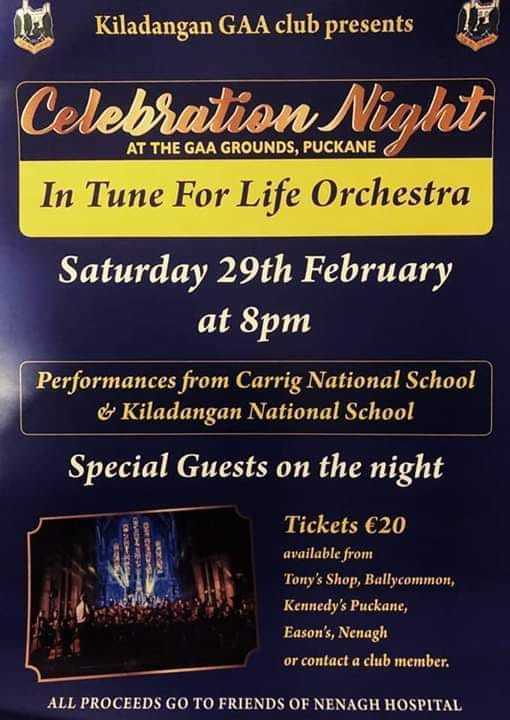 The draw for the groups of the County Hurling League was carried out last week. In Division 1, our Seniors have been drawn into group 2 where they will take on Lorrha Dorrha in the first round on in Puckane on the weekend of 8th March. Nenagh Eire Og, Kilruane, Upperchurch Drombane, Moycarkey Borris, Thurles Sarsfields and Portroe also make up the group. In Division 3, our Senior ‘B’ side will be at home to Ballinahinch in the first round on the weekend of 8th March. Galtee Rovers, Moneygall, Moyne Templetouhy, Arravale Rovers and Boherlahan Dualla make up the rest of the group. The second round of games takes places on the weekend of the 15th March and the remaining rounds will be played throughout the summer.

Kiladangan are away to Ballina in the first round of the group stages of the North Junior ‘B’ league. This is due to commence on the weekend of 1st March. The remaining schedule of games are as follows – 8th March home to Moneygall, 15th March home to Borrisokane, 22nd March away to Ballinahinch and 29th March home to Toomevara. Please note that these fixtures are provisional and subject to change.

Hard luck to Fergal Hayes who was corner back on the IT Carlow side that unfortunately lost out to UCC on a 2-11 to 0-18 scoreline last Wednesday in the Fitzgibbon Cup Final. Well done to Fergal who played a big part in IT Carlow’s campaign on making it to the final. Best of luck to Sean Hayes (Limerick IT), Bryan McLoughney and Matthew Cleary (both University of Limerick) who are all currently playing for their respective colleges in the All Ireland Fresher Hurling Championship.

The Tipperary senior hurlers’ game against Galway last weekend was cancelled due to the inclement weather. They will be out in action this coming Sunday (23rd Feb) against Westmeath in Nenagh at 2pm whilst the footballers will take on Cork this Friday (21st Feb) at 7 pm in Semple Stadium. Best of luck to the Kiladangan contingent.