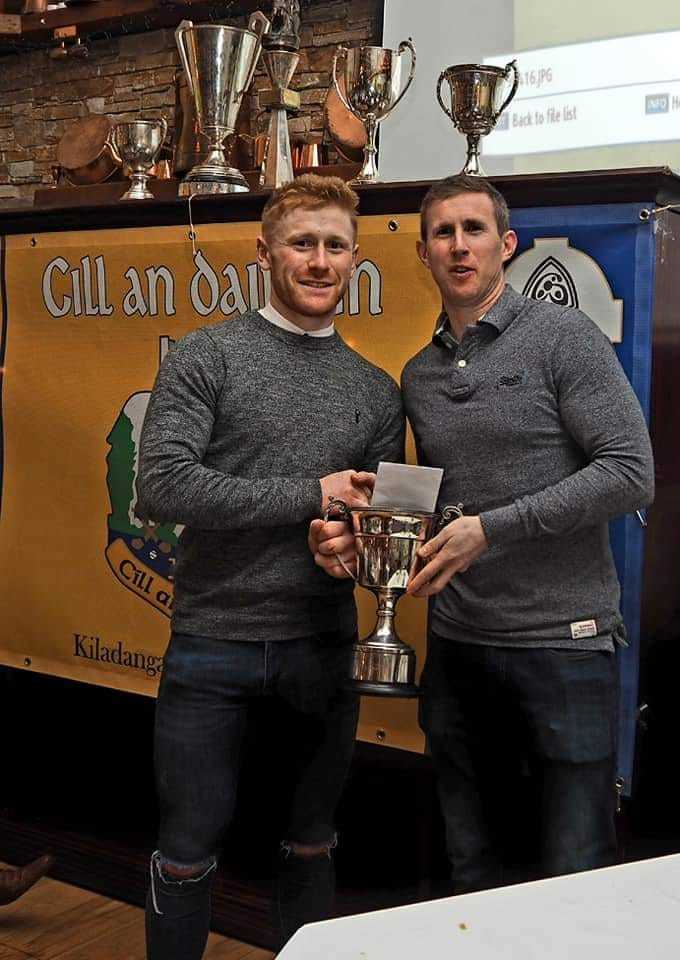 A great night was had last Saturday In the The Thatched Cottage Ballycommon where the club held its presentation night for our North Senior Champions, North and County U21 ‘A’ Champions and North Minor ‘A’. Many thanks to Gary Sice (current Corofin and former Galway footballer) who spoke very well on the night as the special guest where he had a Q&A session with Darragh Egan which proved very insightful for all those in attendance. Medals were presented to 66 players in total which special presentations to all those that played inter county in 2019 and to the management and members of the back room teams. Presentations were made to outgoing officers Karen Seymour and Siobhan McLoughney. Well done to Paul Flynn who was named 2019 Kiladangan Club Player of the Year and he collected his award on the night. Many thanks to all those that attended and to The Thatched Cottage who were fabulous hosts on the night – also thanks to Oisin Ryan who was DJ on the night. Photo’s of the night are available on the club’s Facebook page – thanks to Siobhan Ryan for taking the photo’s.

The following are the commencement dates for a number of league and championships:

Minor Football – due to commence this coming weekend . Ballina and Inane Rovers are due out in the first round with Kiladangan due to play the losing team the week after.

Once the clocks change on March 29th, all juvenile games will be played on the following nights - Monday Under 16, Tuesday Under 12, Thursday Under 14.

Child Protection Course will be held in Ballycommon Muintir Na Tire Hall on Friday 14th February. Course starts at 6.30pm till 9.30pm and registration at 6.15pm.

Open to anyone that need course be it coaches or committee members. Cost for course €12-€15 pending numbers

Well done to Fergal Hayes who was corner back on the IT Carlow side that defeated Mary Immaculate College last Saturday in the Fitzgibbon Cup Semi Final. They will now take on UCC in the final which will take place this Wednesday 12th at 7.30 pm in the Dublin City University Sportsgrounds. Best of luck to Fergal and the IT Carlow side.

Well done to both Gavin McGrath and Richard Cullinane who were named as part of the North Tipperary Under 14 Hurling panel that took on South Tipperary at the weekend.

In this weeks Kiladangan Abroad, we make a return trip to...

Return to PlayAs per the recent GAA guidelines, the GAA G...

In this weeks Kiladangan Abroad, we make our first journe...