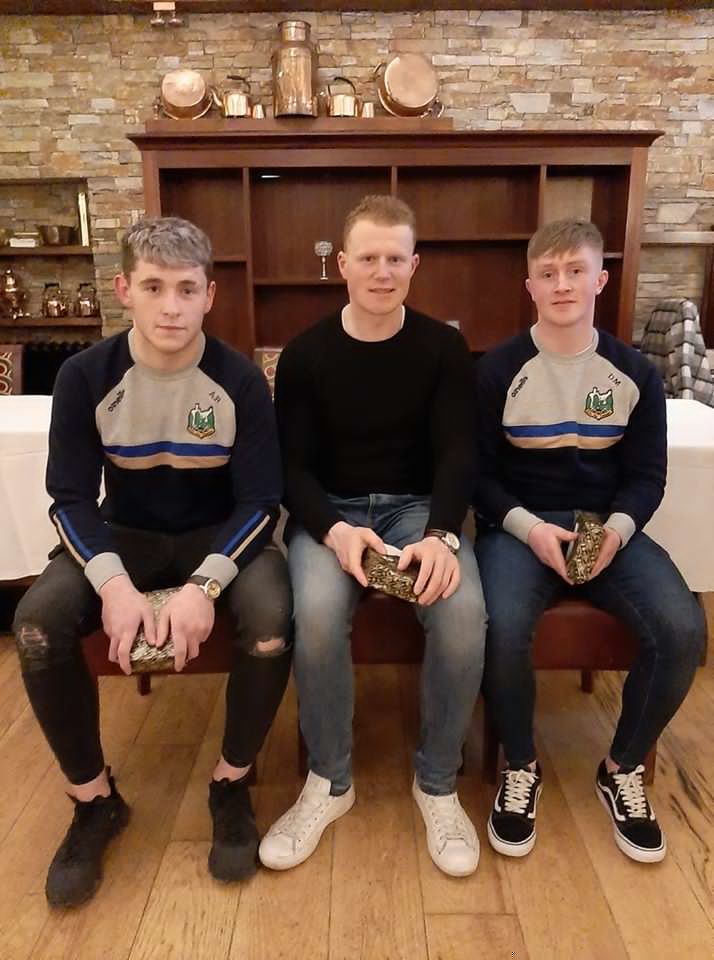 The Presentation of medal’s to our North Senior Champions, North and County U21 ‘A’ Champions and North Minor ‘A’ Champions will take place on Saturday 8th February at 7.30 pm in The Thatched Cottage Ballycommon. Entry to the presentation is free with former Galway and current Corofin footballer Gary Sice special guest on the night. If you wish to attend then please text Michael Quinn on 087 2548583 (for catering purposes).

Confirmed Management Team’s After last week’s adjourned AGM, the following management team's have been confirmed for 2020:

Championship Draws The draws for Dan Breen and Seamus O’Riain County Hurling Championships took place last Monday 27th January with no draw details at time of going to print. The North Senior Hurling Championship draw will take place this coming Thursday 30th January at 8pm in The Hibernian Inn Nenagh – full details of all draws will be available on the clubs social media pages, website and clubify. Tipperary CCC have confirmed there will be 3 weekends of club games in the spring window.

Divisional hurling only will be played along with one round of county football.

Inter County Hurling Hard luck to Alan Flynn (wing back), Willie Connors (scored 0-1 from corner forward), Paul Flynn (who made a second half substitute appearance) and Barry Hogan after Tipperary Senior Hurlers were defeated by Limerick last Saturday evening in Thurles on a 0-18 to 2-14 scoreline in Semple Stadium. Tipperary Hurlers will now take on Cork this coming Saturday 1st February in Pairc Ui Chaoimh at 7 pm. Dan O’Meara is part of the Tipperary football panel that take on Louth in in Drogheda this Sunday 2nd February at 2pm.

The Quarter Final stage of the Fitzgibbon Cup takes place this week – Barry Hogan’s UL take on Mary I on Wednesday 29th January in Mary I at 2pm, whilst on Thursday 30th, Fergal Hayes’ Carlow IT take on Darragh Flannery’s NUIG in Carlow at 6.30 pm.

Hard luck to Neil Cahalan (goals) , Conor Culhane (full back)n, Darragh Ryan (corner back) , Conor Byrne (midfield) Aidan Ryan (wing forward), Bill Cleary and Robert Clarke who were part of the Borrisokane CC panel that were defeated by Doon last Saturday in the Munster Senior ‘B’ Hurling Semi Final. Hard luck also to Joe Gallagher who was part of the Our Lady’s Templemore management team after Our Lady’s were defeated by St Flannan’s in the Harty Cup Semi Final last Saturday.

Kiladangan are running a Super Bowl square to kickstart the new year in the club. There are 100 squares up for grabs and first prize is €1000. Each square costs €50. For those unfamiliar with NFL squares it involves 100 boxes (1 name per box) placed in a square and then numbers are drawn to each grid as per attached photo and the winner is determined by the 2nd digit from the full time score so for example home team 13 away team 17 the person in the corresponding box where 3&7 meet is the winner. There will also be prize money for half time score, and score at the end of both quarters. Essentialy it’s a bit of fun and makes the game entertaining to watch with the luck of the draw determining the winner. If you wish to purchase a square then please contact Art Flannery on 086 3577571 or you can purchase online at : kiladangangaa.clubifyapp.com/products. Deadline is this Friday 31st January.