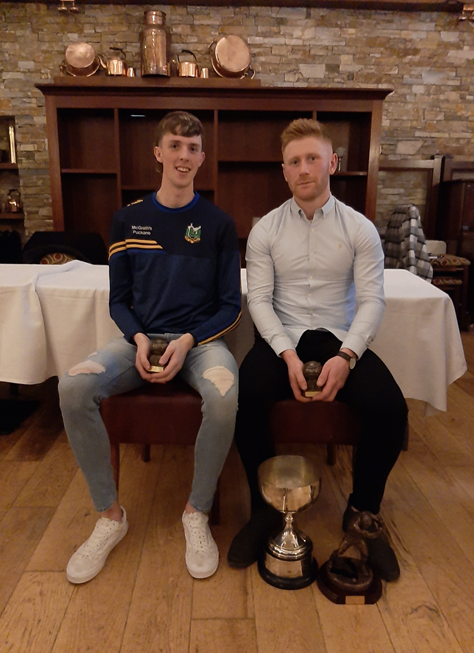 There was a large attendance at the North Tipperary GAA Awards night in The Thatched Cottage in Ballycommon last Saturday where Seamus Quigley, Mary Hogan and Art Flannery collected the North Tipperary Club of the Year award on behalf of the club after what was a great year in claiming the North, Under 21 ‘A’ and Minor ‘A’ North titles as well as reaching the North Intermediate final .

Minor 'A' Joint Captain Eoin McGrath, Senior Vice Captain Darren Moran and Under 21 'A' Captain Darragh Molloy collected the North medals on the night whilst special guest on the night was Tipperary All Ireland winner and Kiladangan great Seamus Hogan. Well done to all the winners on the night.

The Presentation of medal’s to our North Senior Champions, North and County U21 ‘A’ Champions and North Minor ‘A’ Champions will take place on Saturday 8th February at 7.30 pm in The Thatched Cottage Ballycommon. It would be great to see a big attendance on the night – more details will be announced within the coming days.

The Club's Adjourned AGM will take place this Wednesday 22nd January at 8pm in the club house in Puckane. All are welcome to attend

Kiladangan’s involvement in the Fitzgibbon Cup continued last weekend . Fergal Hayes was corner back on on the Carlow IT team that defeated GMIT, Barry Hogan was in goals for UL who defeated Trinity, Billy Seymour scored 0-6 for Limerick IT and was joined on the team by Darren Moran who was full back and were defeated by Mary Immaculate college, Dan O’Meara didn’t play in the game.

Limerick IT will be out in action this Wednesday at home to TU Dublin City at 2 pm, UL will be in action Thursday at 7.30 in UL whilst Darragh Flannery’s NUIG will be playing Cork IT this Thursday at 7 pm in Cork.

Best of luck to Neil Cahalan, Conor Culhane, Darragh Ryan, Conor Byrne Aidan Ryan, Bill Cleary and Robert Clarke who are part of the Borrisokane CC panel that take on Doon this Saturday (25th) at 12.30 pm in Newport in the Munster Senior ‘B’ Hurling Semi Final. Best of luck to Joe Gallagher who is part of the Our Lady’s Templemore management team that take on St Flannan’s in Nenagh at 1 pm this Saturday in the Harty Cup Semi Final.