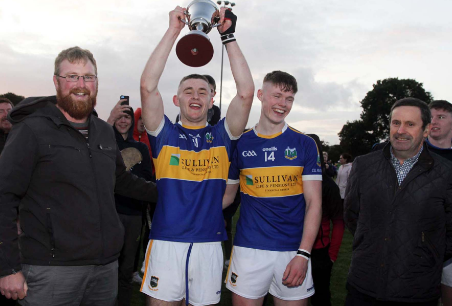 Please note that the North Tipperary GAA presentation night will take place this coming Saturday 18th January 2019 at 8pm in The Thatched Cottage in Ballycommon. On the night, the club will receive the trophy for 2019 North Club of the Year whilst Paul Flynn (Senior), Dan O’Meara (Under 21 A) and Sean Hayes (Minor A) will receive their North Hurler of the Year awards. It would be great to see a large Kiladangan contingent attending on the night.

The Presentation of medal’s to our North Senior Champions, North and County U21 ‘A’ Champions and North Minor ‘A’ Champions will take place on Saturday 8th February at 8pm in The Thatched Cottage Ballycommon. It would be great to see a big attendance on the night .

The Club's Adjourned AGM will take place on Wednesday 22nd January at 8pm in the club house in Puckane. All are welcome to attend

There is a large Kiladangan contingent involved in the Fitzgibbon Cup which is commenced last weekend.

Fergal Hayes was part of the Carlow IT team that defeated UCD, Barry Hogan was in goals for UL who were defeated by DCU, Darragh Flannery was a member of the NUI Galway panel that was defeated by UCC, Billy Seymour scored 1-11 from wing forward for Limerick IT and was joined on the team by Darren Moran who was full back and Dan O’Meara who was corner forward where they were defeated by Waterford IT.

They will be out in action again this coming weekend – on Sunday, UL will play Trinity in UL at 3pm, LIT will play Mary I in Mary I at 1.30 pm, Carlow IT will play GMIT at 2 pm in Carlow whilst NUIG have a bye. Best of luck to all.

Also well done to Joe Gallagher who was part of the Our Lady's Templemore management team that defeated Thurles CBS last Wednesday in the Harty Cup Quarter Final.

Well done to Eoghan Ryan who won €200 in the recent Tipperary Club Draw.

The club wishes to express sympathy to the Flynn family (Killard) on the death of Kathleen’s mother, Bridie Coen (Loughrea, Galway) who passed away recently.

Sympathy is also expressed to the relatives Tom Kenny who passed away recently. Tom was a Garda from North Kerry who came to us in 1968 and was a member of the team beaten by Shannon Rovers in that years Intermediate final. He was also on the panel that won the North and County Intermediate championship in 1971 and at senior level up to 1973.

May the both rest in peace.